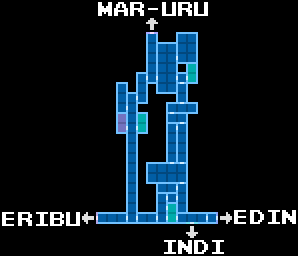 Ukkin-Na is the next area that Trace can fully explore after Indi. It is an organic cavernous area filled with green and turquoise rocks which eventually ascends to the surface of Sudra. There are also signs of industrialization in this area, as a strange series of translucent pipes can be seen moving liquid in the lower regions. The Rusalki Daraga and Ophelia are located in the upper area, Elsenova arrives later as well. Shortly after arriving at Ukkin-Na, a pathogen begins affecting Trace and he begins hallucinating. Most of the enemies he encounters during this time are never seen after this segment of the game. The enemy section below reflects the enemy encounters during, then after the hallucinations. The etymology of Ukkin-Na is Ukkin which is Sumerian for Assembly Temple or Divine Concuil.

Some of the rooms named in the game code are: Entrance to Madness, Foyer of Insanity, Shaft of Laughing Faces, Corridor of Psychosis, Living Room of Illusion, Guest Room of Mental Illness and Mudroom of Neurosis.

Retrieved from "https://axiom-verge.fandom.com/wiki/Ukkin-Na?oldid=7953"
Community content is available under CC-BY-SA unless otherwise noted.