Repair Drones are small pale-blue machines that walk on four legs. Their primary purpose is to repair and maintain the Rusalki. They seem to act independently, without outside control, or possibly they are connected to some central AI through a wireless interface.

Repair Drones are manufactured in great numbers in Kur once Trace reactivates the Repair Drone spawner. 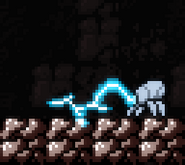 Add a photo to this gallery
Retrieved from "https://axiom-verge.fandom.com/wiki/Repair_Drones?oldid=6337"
Community content is available under CC-BY-SA unless otherwise noted.