"Fire to launch a remote drone, which you may detonate at any time to return to Trace."

The Remote Drone is a small brown machine that walks on four legs, which Trace can control remotely. Trace is protected in a stasis barrier from all damage while operating the Drone. It has its own health bar and a single short-range laser that is produced from its red eye. This Drone Drill can harm enemies and destroy breakable terrain blocks just like Trace's Laser Drill. The Drone is small enough to fit into tight spaces where Trace is not able to go through, similar to the Morph Ball in Metroid games. This can give him access to hidden tunnels that may lead to secrets and items.

When damaged, the remote drone can absorb dropped health from enemies the way that Trace does. If the drone loses all of its health or is commanded to return, it will detonate and then return to Trace as floating red particles— similar to the way Trace returns to the last Rebirth Chamber he used. Once returned to Trace, the Remote Drone's health will recharge at a rate of about 100 points in 5 seconds. Collecting Power Nodes will increase the drone's maximum health.

Although most Remote Drones were shut down by Athetos, this one is still active when Trace finds it. This is because it operates on an independent control schema and runs on self-contained battery power.

The Drone can be controlled from great distances, even across several areas, as long as it can continue to navigate Sudra's terrain.

The Remote Drone's damage resistance is 0.5 meaning it takes 1/2 of the damage Trace would without the Lab Coats or Red Coat on.

The Remote Drone is located in the center of Kur. The entrance to the room it's in is to the right of the second big overworld area Trace visits. It's also west of the boss room. 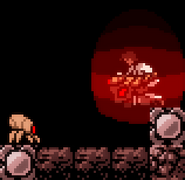 Add a photo to this gallery
Retrieved from "https://axiom-verge.fandom.com/wiki/Remote_Drone?oldid=7746"
Community content is available under CC-BY-SA unless otherwise noted.