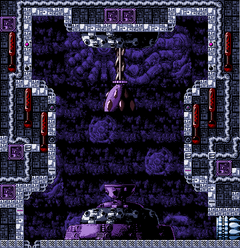 The Rebirth Chambers are the egg-shaped save points in the game that allow players to fully heal and replenish bomb charges. These chambers are an ancient Sudran technology from before the collapse of their civilization.

During the coming of Athetos, the Sudrans guarded these Rebirth Chambers from even the Rusalki, who had to request access to them[1] in order to proceed with Ophelia's plan to create a clone of Trace.

The Rebirth Chambers do not repair a damaged Remote Drone. It is possible that they were built to only heal biological organisms, and cannot repair technology. This is further supported by Elsenova's statement "You can heal inside egg", as though the Rusalki cannot use them.

Should Trace lose all of his health, the Nanogates the Rusalki use to communicate with, and monitor Trace swarm back to the last Rebirth Chamber he used.

None of the Rebirth Chamber rooms contain any items, secrets, or upgrades. There is no need to attempt drill or corrupt the walls of them.

Rebirth Chambers can be found all around the map, marked as light-blue rooms. These rooms are safe from any enemies and can be used to save your progress. Upon death, Trace will be returned to the most recently used Rebirth Chamber.

Retrieved from "https://axiom-verge.fandom.com/wiki/Rebirth_Chamber?oldid=6588"
Community content is available under CC-BY-SA unless otherwise noted.