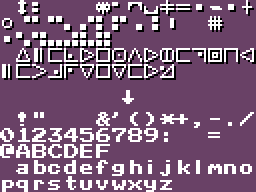 In the ending cutscenes, Trace can be seen deciphering this code. He has figured out the letters of the alphabet (in red-orange, at left), in order, except for I, K, P, Q, W, X, and Y, and has also deciphered the 16 hexadecimal numbers (in gray, below).

Retrieved from "https://axiom-verge.fandom.com/wiki/Primordial_Code?oldid=7948"
Community content is available under CC-BY-SA unless otherwise noted.