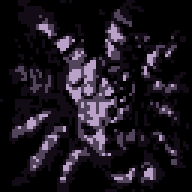 The Pathogen, sometimes called the Plague, is a biological disease released as an agent of genocide against the Sudran people. Athetos released the Pathogen to mutate and wipe out the Sudrans after he discovered that they were using the Breach to prevent travel to other worlds and universes, thereby preventing any technological advancements being spread to other universes, and specifically to Earth.

Trace is heavily affected by the Pathogen late in the game, causing him to hallucinate through most of his initial travels through Ukkin-Na, culminating in a battle where he believes himself to be a boss. Although it is difficult to say when or how Trace is initially infected, the game does show a brief hallucination much earlier, when the effects may still be mild. In Zi, while players are making the climb to Kur for the first time, they might notice another Trace in the upper-left corner of the screen.

Retrieved from "https://axiom-verge.fandom.com/wiki/Pathogen?oldid=7537"
Community content is available under CC-BY-SA unless otherwise noted.