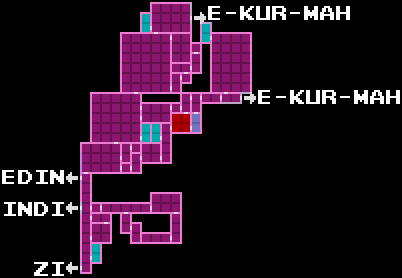 Kur is the next area of Sudra that Trace travels through after Zi in order to activate the Repair Drones. It is an arid area with brown and tan rocks, and ancient ruins.

Trace enters Kur through its underground caverns and ascends to the forested surface mountain slopes, eventually reaching even greater heights of ice crags in the mountains, where snowfall occurs. At higher elevations, the effect of the Breach can be seen in the upper atmosphere.

In its eastern section, Kur also has rooms with Thorn Mazes, large flowers, and pools of pink acid that can harm Trace on contact, or which he can drown in if submerged.

The bluish grey wreckage of Repair Drones can be found scattered on the ground all over this area.

Most significantly, Kur is where Trace will find Katrahaska's room, after defeating the Variant called Gir-Tab.

The etymology of Kur is the underworld, sometimes known as the land of the dead.

"I believe the language is Hindi, and I have no idea what she is saying - I purchased it on a sample disk of Indian singing"[2] - Tom Happ