Katrahaska is one of six Rusalki that Trace encounters in his journey. She is already dead by the time Trace discovers her, and her head appears to be torn open. 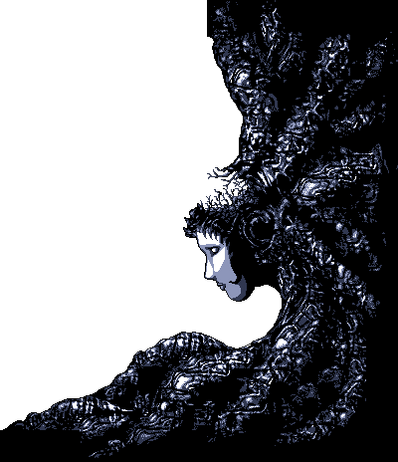 Katrahaska is revealed to be the one Rusalka who betrayed the others and sided with Athetos, helping him spread his pathogen before she was defeated and shut down by Elsenova. It can be assumed that Katrahaska harbored hatred for the Sudrans after they had activated the Breach Attractor, causing the Breach to envelop planet Sudra, and as a result killing many Rusalki as well as trapping the remaining survivors on the planet.[3]

Based on what we learn in Plan B (Note) and CUTSCENE 0031, we can say that it's likely Katrahaska's nanogates are now being used by the other Rusalki to monitor and coerce Trace's actions.

Retrieved from "https://axiom-verge.fandom.com/wiki/Katrahaska?oldid=7469"
Community content is available under CC-BY-SA unless otherwise noted.