Only two of these are seen alive, both in a room in central Edin, hanging from a beam-supported structure. Initially it appears to be a harmless plant pod, impervious to all of Trace's weapons and upgrades. When Trace is very close it unfurls it's tentacles and wiggles them menacingly for about 9 seconds, then closes up again. Once unfurled, all of Trace's weapons can damage it. It can be corrupted in any state. There is one right by the exit to Kur, but it appears to be dead, and Trace cannot interact with it.

When corrupted, the Green Silk Pupae takes on the characteristics and behaviour of a Carnivorous Silk Bug, dropping down on Trace from above when he's close. 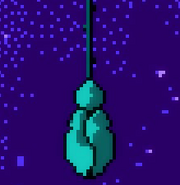