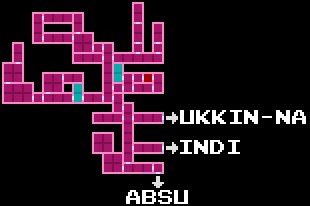 Eribu is the starting area of Axiom Verge. It is a dreary cave area filled with rocks as well as strange red bubbles. There are many secrets, weapons and upgrades in this area, many of which can only be reached after obtaining one or more upgrades from other areas.

See the Passcodes page for information on locations of Passcodes.

Eribu is the Sumerian for "enter".[1] This makes sense, since Eribu is the game's starting area, and presumably the first place Trace Prime came to when arriving on Sudra.

The song that plays while Trace is in Eribu is "Trace Awakens". It can be replayed using the Passcode TRACK0-000002.

Retrieved from "https://axiom-verge.fandom.com/wiki/Eribu?oldid=7754"
Community content is available under CC-BY-SA unless otherwise noted.