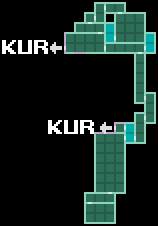 E-Kur-Mah is accessible in the later portion of the game, after obtaining the Drone Teleport. It is an ancient temple adjacent to the east side of the surface portion of Kur, and it has a cyan, gold, and green color theme. The outside of the temple is pyramid-shaped and this motif is shown in the interior as well. In the upper area, there are powerful robots guarding the ancient artifacts housed here. The Etymology of E-Kur-Mah is Ekur which is Sumerian for mountain house.

Trace will have to fight his way through the Sentry robots and explore the temple's deepest areas to find the Sudran Key, which unlocks barrier seals blocking the way to the lower sections of this area. The lower sections are overgrown with plant life, some of which will attack Trace if he gets close. The largest lower room is called the Verdant Cavern, and the lowest room is the Breach Suppressor Room.

Retrieved from "https://axiom-verge.fandom.com/wiki/E-Kur-Mah?oldid=7954"
Community content is available under CC-BY-SA unless otherwise noted.