"Teleports you to the location of your remote drone."

The Drone Teleport is a collectible item in Axiom Verge that allows Trace to immediately transport himself to the location of the Remote Drone. It is most notable for allowing Trace to climb to new heights since, when combined with the Enhanced Drone Launch, the Drone can be shot far above Trace's head. While the drone is walking, Trace can teleport to its location and keep walking without any pause in walking speed.

The Drone Teleport can also be used in a technique called "Drone Climbing" to continuously move upward by launching the Drone, teleporting to it, briefly using the Address Disruptor to break the fall stasis, then repeating this until reaching the desired elevation. If mastered, Drone Climbing can be used during Speed Runs to save time on portions of the map that would otherwise need to be traversed through time consuming platforming.

The Drone Teleport is obtained after defeating the Ukhu Variant in Edin. Once the boss is dead, Trace can proceed through the door on the far left side of the room, then use the Remote Drone to collect the new upgrade. 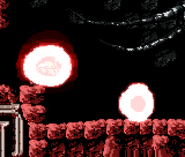 Add a photo to this gallery
Retrieved from "https://axiom-verge.fandom.com/wiki/Drone_Teleport?oldid=7736"
Community content is available under CC-BY-SA unless otherwise noted.