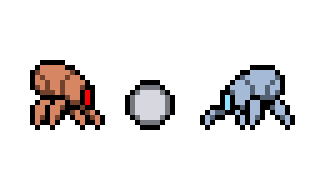 Drones are small, four-legged, remotely controlled machines in Axiom Verge. There are several different kinds, some which can act independently and some which seem to be part of a larger machine network. However all Drones seem capable of defending themselves with some form of laser weaponry.

Drones are stored in a small egg-like capsule until they need to be deployed. Upon impact with a hard surface or upon remote-activation, a drone will burst the capsule and then is free to walk around on its own.

In addition to more efficient storage, the capsule has the advantage of being a vehicle for launching a drone across gaps and into otherwise unreachable spaces.

R
Retrieved from "https://axiom-verge.fandom.com/wiki/Category:Drones?oldid=6188"
Community content is available under CC-BY-SA unless otherwise noted.