This page refers to the character Athetos. For the in-game Note of the same name, see Athetos (Note).

Athetos is a human and the very first version of the clone Trace who was able to reach Sudra by discovering a way to pass through the Breach from Earth. He acts as the game's primary antagonist, having eventually used a pathogen to wipe out almost all of the Sudrans. Being the prime Trace, Athetos' personality used to be much more similar to the kind, pacifist temperament of Trace the player character; however, hundreds of years spent in Sudra caused Athetos' morality to shift to the point where he is willing to annihilate entire sentient species in order to secure technological benefits for humanity.

The prime Trace was a theoretical physicist whose revolutionary theories were regarded by other scientists as false and insignificant, thereby earning him the nickname "Athetos" (see the Etymology section for more information). Trace was blacklisted by many of his colleagues. Nonetheless, he continued striving to validate his work.

In the year 2005 in a New Mexico research facility, Trace and colleague Hammond worked on an experiment based on Trace's revolutionary ideas in the field of physics. The beamlet in the experiment goes awry with the pressure valve and a huge explosion occurs, severely injuring Trace and rendering him blind, immobile, and wheelchair-bound. During this time, Trace has an epiphany of a greater understanding of physics. Using this newfound knowledge, Trace and colleague Hammond are able to discover the Breach, a barrier between universes. Crossing the breach, they find the world of Sudra. Sudra is a gateway world of sorts — its purpose is to regulate travel between other worlds and universes. However, by the time Trace arrives, Sudra's civilization had collapsed, and its inhabitants no longer remember that purpose.

The prime Trace and his colleague Hammond discovered Sudra's incredible technology and used a Rebirth Chamber to completely heal them of injuries sustained from the lab explosion back on Earth. Trace will eventually discover that it is possible to utilize the Rebirth Chambers in Sudra to create clones of himself. By using this chamber, Trace also inadvertently leaves behind a genetic imprint of himself. Hundreds of years later, the Rusalki, which are sentient, towering war machines, will be able to utilize the prime Trace's genetic imprint to create a clone of him, setting up the events of Axiom Verge.

For some time, the prime Trace explored Sudra and made contact with its inhabitants. According to the Faded Note, Trace eventually decided that the Sudran technology is too dangerous to bring back to Earth, believing that it is connected to the catastrophic collapse of Sudra's civilization. Trace, Hammond, and any of Trace's clones then attempted to go "upstream - to the Filter, or whatever lies beyond - for answers." In doing so, Trace discovers that there is a world beyond Sudra — one with an incredibly advanced civilization that the Sudrans have kept hidden due to religious taboo. This world is full of technological wonders that could end all war, strife, and sickness on Earth. It is unclear what happens to Hammond during this time, but we can consider this the starting point in which Trace's morality becomes warped, and he adopts the moniker "Athetos." Athetos decides that the needs of the many outweigh the needs of the few, and that the only way to bring this technology back to Earth is to annihilate the Sudrans, who would refuse passage between Sudra and the worlds beyond. As a result, Athetos begins creating more allies — genetically modified, "variant" clones of himself, using the genetic imprints he had left in the Rebirth Chamber. He also manages to convince the Rusalka Katrahaska to aid his cause. After building an army, Athetos goes on the offensive with biological warfare, creating a pathogen that wipes out and mutates almost all of the Sudrans on the planet.

With Sudra largely barren of any resistance, the only beings who can oppose Athetos are the three remaining Rusalki: Elsenova, Ophelia, and Veruska — who stayed true to their purpose of guarding Sudra. They battled against Athetos, his Variants, and Katrahaska. Using Remote Drones, the Rusalki managed to destroy Katrahaska and Athetos's mobile pathogen protection, forcing Athetos to retreat to a hideaway in Mar-Uru, far above the surface of Sudra and extremely close to the Breach where the Rusalki cannot approach without being killed. Athetos would spend centuries holed up in the highest peak of Mar-Uru, waiting for a chance to deactivate the Breach Attractor so he may escape Sudra. However, before fleeing to Mar-Uru, Athetos had managed to deactivate the production of Remote Drones, leaving the Rusalki nearly helpless, dormant, and degrading over time. All Athetos has to do is wait for the Rusalki to decay into nothingness, since he would be killed immediately if he deactivated the Breach Attractor while the Rusalki were still functional. 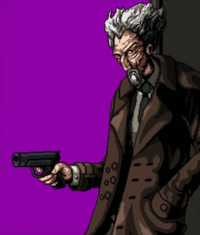 Many centuries later, Athetos is ultimately located and confronted by Trace the player character atop Mar-Uru. The clone Trace and Elsenova manage to coordinate the destruction of the Breach Attractor, and after a lengthy battle, Athetos is subsequently killed by Elsenova's laser beam, despite Trace's pleas not to kill him.

Athetos is seen afterwards on Earth in the game's true ending, where he shoots Trace with a gun while stating, "There's no use running from your own self. Time to wake up, Trace."

When Trace reaches the peak of Mar-Uru, he encounters Athetos. Face-to-face with an alternate version of himself, Trace demands answers, trying to understand how he could become a genocidal monster. Ultimately seeing that there is no reasoning with Athetos, Trace decides he must disable the Breach Attractor and render Athetos helpless.

Trapped inside a tank keeping him alive, Athetos will not fight directly, but will instead send Beholder Sentries to attack Trace. Athetos will continuously summon additional sentries if they are destroyed, but can maintain a maximum of 3 at any given time.

The fight will consist of 3 waves. Each wave ends when you disable the Breach Attractor. Athetos will not summon sentries during the break between waves, so if you choose to destroy all 3, you will have a brief reprieve before needing to defend yourself again.

After the boss, you will be shown a few cutscenes, a final statistics screen, and then taken to the main menu. Your game will not save, and you can continue your save file from where you last saved (probably somewhere in Mar-Uru).

Note: If you want your save file to contain 100% of the map explored, or a glitched Beholder, you can start the final boss fight and then save and quit. This will store the information without completing the game. This is not necessary for the Achievements, but may be useful in some cases.

With the entire game's arsenal at your disposal, there are a variety of ways to approach this fight. The main thing to remember, in all cases, is that your primary focus should be staying alive. If you kill one of Athetos's Beholder Sentries, it has a chance to drop a significant amount of health. This chance will increase the lower on health you are, so keep that in mind. If you drop below 50% health, it's time to start focusing on killing the Beholders until they drop health for you.

There is an audible tone every 5 seconds before the Beholders change positions. Their new positions are based on where you are at the time. If you teleport to the ceiling the Beholders will move to fire on that position, allowing you to drop down to the floor and fire on the Breach Attractor in relative safety for a few seconds. With proper timing that can be repeated. The timing continues during the animation between waves, so it may be helpful to repeat the pattern for any surviving Beholders until the Attractor respawns.

If you're doing a low percent run, this battle becomes significantly more difficult, as you won't have much health to survive the persistent attacks of the sentries. Use the Red Coat to teleport up through the sentries and damage the Breach Attractor with the Kilver. If you drop below 50% health, focus all your efforts on destroying the sentries to regain your health, and then continue attacking the Breach Attractor. Bear in mind your Red Coat teleport both damages enemies and makes you invulnerable during its duration, so use this to your advantage. Teleporting back and forth through a sentry will repeatedly damage it and make it have to keep turning to face you, giving you some breathing room and the chance for health.

The Inertial Pulse can be used at great range and will travel through enemies. You can leverage this to stand in one of the corners of the room and fire upward at an angle to hit the Breach Attractor. By doing so, you don't have to keep jumping around. If the Beholders group up on top of you, just switch to the Kilver and unload.

During the in-game cutscene, Trace states "I was blacklisted. And given a nickname: "Athetos" - without place." "Athetos" is derived from a Greek word, which has a significant meaning in the context of the game's story. It can be translated as "without a thesis", "he whose perspective is null", "to not have a (good) claim for what he speaks", or basically "one who does not get to have an opinion and if he does, to be rejected". So, here, it refers to the scientific community rejecting Trace's ideas.