Slowly walks back and forth

This brown creature with red pulsing eyes is heavily armored. Conventional weapons bounce off of it's shell. It can however be harmed by the Drill Laser as well as the Drone Drill, Red Coat, and Repair Drone's attacks. When approached and facing Trace, it will turn it's head away from Trace, retract into it's shell, close it's eyes, and spout gas clouds from the three holes on it's back. It can be approached from behind and drilled without it defending itself. If Trace has collected all the Range Nodes possible before meeting one for the first time, he can slowly approach it with the Laser Drill running while it's spewing gas and it will get damaged before Trace does. 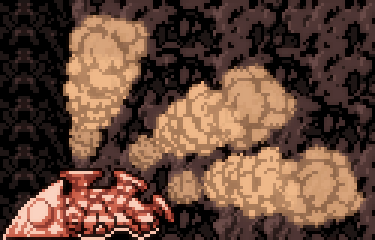 When corrupted, it can take damage from all weapons. Its speed factor is changed to 1.25.

Retrieved from "https://axiom-verge.fandom.com/wiki/Armadillo?oldid=7671"
Community content is available under CC-BY-SA unless otherwise noted.