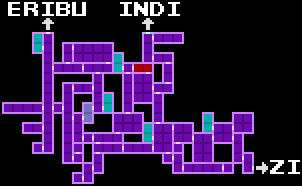 Absu is the second area that Trace travels in his trek through Sudra. Much of Absu's environment is a cavern with colors ranging from green to purple to pink. There are also areas teeming with alien fungi, vines and other plant life. A notably distinct section in the bowels of Absu contains the remnants of a Sudran dungeon/prison, littered with bones and Ghouls. Other sections include a dining hall, ventilation ducts, maintenance room and a hallway with lava flowing under it. The Etymology of Absu is Ocean which also means Abzu

In Absu, Trace will meet Elsenova face-to-face for the first time, and the true depth of the problems facing Sudra will begin to surface.

"Otherworld" for most areas and "Ambient" in the Prison areas.

Retrieved from "https://axiom-verge.fandom.com/wiki/Absu?oldid=7796"
Community content is available under CC-BY-SA unless otherwise noted.