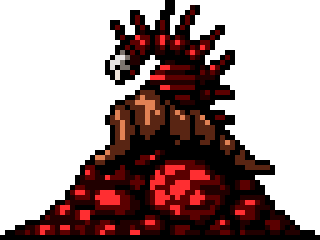 The Aborted Clone is a half-complete experiment in which Athetos was quickly trying to create another Variant. The failure is found by Trace in Edin, and he has the choice to kill it, or watch it die on its own. The Aborted Clone Has 800 Health

There isn't much Trace can do during this "battle". The Aborted Clone will not attack directly, but it will inflict damage on contact. Trace can either shoot the clone or wait for its inevitable demise.

You have to break open both of the red masses in order to trigger a cutscene. After that, you can shoot the clone or wait for it to die on its own. If you wait, you are rewarded with the trophy "Pacifist".

Add a photo to this gallery
Retrieved from "https://axiom-verge.fandom.com/wiki/Aborted_Clone?oldid=7804"
Community content is available under CC-BY-SA unless otherwise noted.